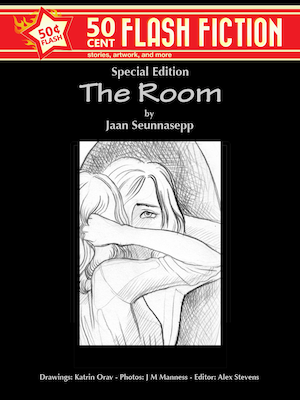 Most Magyarul: A Szoba

“Jenni Plochka?” the worn woman in a pink bathrobe read the card in a harsh, tobacco and booze voice. The blue “Vacancy” flashed through her cigarette smoke. She frowned suspiciously. “Don’t get many BMWs here.”

This first volume of 50 Cent Flash Fiction will bring you into the fun, interesting, and intriguingly bizarre world of Jaan Seunnasepp. Jaan has a unique, dark sense of humor is playful with his writing, which makes for fun reading – you can’t help but smile or laugh out loud.

“Everything I learned about human nature I learned from me.”

The BlueCat Screenplay Competition Blog has an interesting post that should be of interest to most writers, titled: How to Finish Writing Your Screenplay.

There are suggestions for creating deadlines. Another point is a discussion of boredom with the project. It is reassuring to see that others have similar problems to your own. My favorite, however is the following:

Review the Feedback You Hated

Remember the notes you got that you thought were relevant? Do you recall the feedback that you dismissed as being sloppy and inconsistent with all the other feedback you have received? Go back to it. Read it again. You might be in a place to finally hear the criticism and spark new ideas and start working on your script again.
Notes that have been set aside suddenly make sense when you’re on the floor, crying like a baby.

I thought I was the only one who reacted like this!!!

But seriously, to read over the notes again after some time has passed, is a good idea.

I remember my editor on these 50 Cent Flash anthologies giving me notes on the stories. It was just as the article said, there were some made sense immediately, others after a little time. There were also those I definitely did not agree with and skipped. That is my right – I am the writer in the end! But there was a last category – those notes that I did not like but could not really justify ignoring – I did not have a strong reason for rejecting them. In the end I decided that in these cases, where I could not find a good reason to reject the critique – I would accept it and make the changes. I figured my resistance was most likely just pride, and so I would trust Stephen.

Check out one of the anthologies and let me know what you think!

Good writing to you!

I really enjoyed this interview by Author Magazine with Cat Rambo. Quite a few themes she touched on struck home. Of all of them, however, was this:

You have to give yourself permission to write crap.

What are your thoughts?

The interview page is here.

While this page is devoted to 50 Cent Flash fiction I also like to include various notes on writing.

At the 2017 Willamette Writers Conference, I was having drinks with actor/producer Gil Luna and we got on the topic of writers putting direction in the script/screenplay.

“But Gil,” I said. “If I have this idea of the film, a shot that goes this way, why shouldn’t I put it in? I mean this is an important part of my vision. I mean I know that ultimately the director is going to decide how it is shot, but why can’t I give him my vision. Yes?”

“The reason,” he replied, “is that it is insulting to the director.”

I was shocked at the idea, and at this point started recording the video. Here it is in his own words.

So . . . last year, I signed a contract for a two-book deal with Kensington for books one and two in the Dark Glass Series. Keep in mind that I tend to “hang out” both in person and online with a lot of other writers. I think that’s normal for someone who’s been in the biz as long as I have. I am a go-with-the-flow kind of person, and my mother taught me the great value of the importance of nodding and smiling.

I’d been with Ace/Roc since 2002, and a number of my self-published writing friends/acquaintances were surprised when I signed on with Kensington, not because I was changing publishers, but because I was working with a publisher at all.

“Geez, Barb. Why are you doing that? Why give a publisher any of your royalties. Why not just self-publish your new series?”

As a youngster with a budding interest in photography, I was inspired by this photo. The fact that an image can END_OF_DOCUMENT_TOKEN_TO_BE_REPLACED

5.0 out of 5 stars  Short stories with a twist
ByÅsa Stenström on April 5, 2017
Format: Kindle Edition
All these three stories are dealing with the human soul or psyche. They build up and then the surprise at the end turn things over. It’s possible that the end will cause the stories to continue in your head…

5.0 out of 5 stars  Very entertainig and well worth the price!
ByKevin Smeltzer on April 5, 2017
Format: Kindle Edition
From the first few sentences it is obvious that the writer has a talent for expression using few words. The stories were interesting with a lot of dark humour thrown in. Once you start reading you won’t be able to stop!
4.0 out of 5 stars    delightfully dark
ByAmanda Gerace on August 9, 2012
Format: Kindle Edition
Delightfully dark and surprising, these little gems of story-telling are a fun read. I love that the photographs at the end added even more depth to the last story. I am left with a sense of curiousity and a craving for a glass of Tokaji!

ByZon February 2, 2014
Format: Kindle Edition
Waiting for a Latte, is story that connects to place. Everything about Portland the reader knows, or thinks, gets tapped into here. Seunnasepp brings our own urban anxiety to the table and gives the reader a glimpse of self-awareness through the situation and character interactions. Read in a coffee shop on an iPad, how perfect. A nice multidimensional story focusing on the social subtleties embedded in the mundane.

In Goodie Two-Shoes we meet characters we all already know. Seunnasepp gives us context and details, and a chance to spy on the inner essence of these people we all see on a daily basis. The writing is never dense, never showy, but just right.

Couches have flavors. This is an unsettling fact that will no longer be overlooked by the readers. Seunnasepp is heavily influenced by the climate of the Pacific Northwest. We all discuss the weather as a basis of social interaction, and this is the foundational thoughts from which the stores develop.