Pool hall regular Michael is down on his luck until he plays a stranger.

Michael looked up as a tall, slender figure entered the smoky poolroom. He was wearing a fedora and an elegant black coat, and Michael was sure he’d seen him before, but he couldn’t remember when.

Down on his luck these last few nights, Michael had lost easy games. He fidgeted unhappily, and finished his drink. His collar chafed his neck in the oppressive summer heat. “It must be real late,” he thought, as the place was all but deserted. It was one of those nights when it seemed as though he had been in this game hall for eternity.

In a smooth voice, the stranger asked: “Care for a game?” 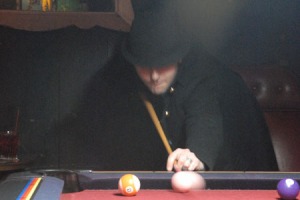